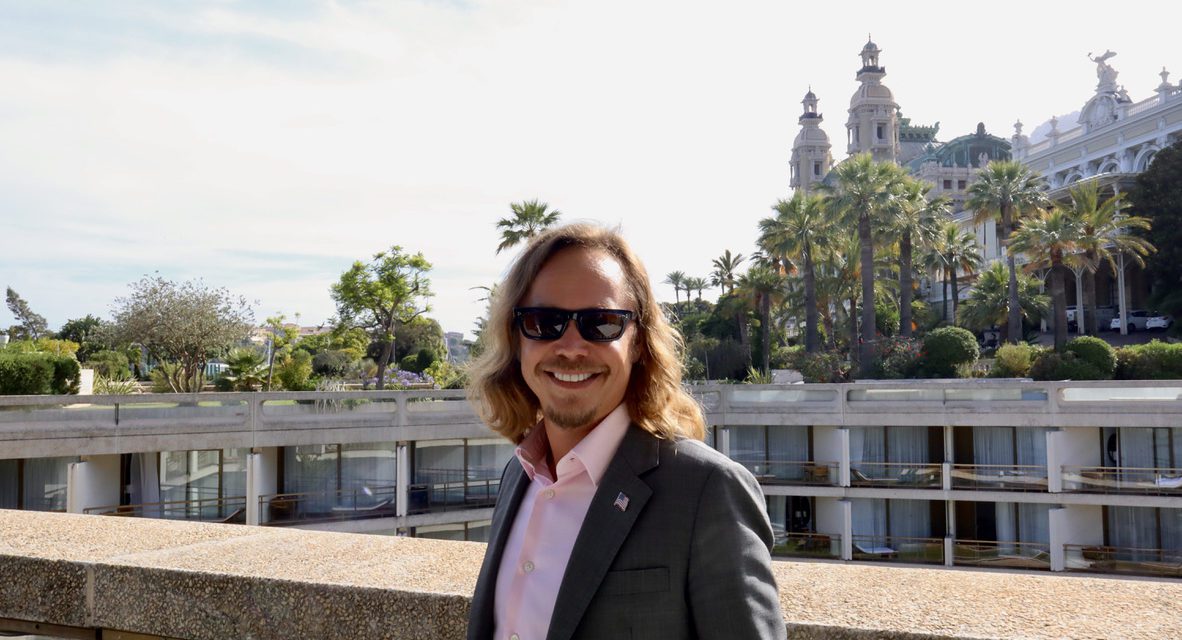 Yet another crash has rocked the crypto world, leaving some cryptocurrency investors out of pocket and understandably frustrated. However, all hope is not lost, as crypto connoisseur and US Presidential Candidate Brock Pierce explained in an interview with NEWS.MC. We had the pleasure of meeting Pierce during the Ritossa Family Office Investment conference earlier in July and discussed all things crypto, its future in the Principality of Monaco and beyond.

It is no secret that you are big on bitcoin, what got you interested in cryptocurrency in the first place?

Brock Pierce: I got into virtual currency in the late 1990s, through games and card games like Pokemon, and Magic the Gathering. Then as the first video games became a network, they’re like virtual nations, so I built out the entire secondary market for all of these groups.

In my early to mid twenties I built up a supply chain of about 400,000 people, principally in China, that would play games to mine currencies. I was Paypal’s largest merchant for years, was instrumental in the launching of Alipay and Ant Financial, and rolled up all the world’s industry into over 10 billion dollars in this business.

I was Goldman Sachs’ first private investment because they took a look at what I was doing and I was effectively managing the markets for three or four thousand virtual countries, and I was 25 at the time. They were like “who are you?” As I was managing something that is, in many ways, more complicated than the world’s financial system.

We used to take economists in and they would come learn under us, because we could experiment with economic theory in a way that you cannot in the real world as the consequences of making a mistake are too high. So naturally that led me to cryptocurrency.

I believe that you lead a delegation to El Salvador to discuss the possibility of that country using bitcoin as its currency.

So you are instrumental in this massive change?

I do everything I can, every day. (BP laughs)

You’re here in Monaco to speak in the Ritossa Family Office Investment conference, how has that been for you so far?

You must be feeling exhausted?

Well I’m only here for 36 hours, I arrived yesterday afternoon, I leave at 6am tomorrow and I haven’t slept. I’m only here for so long, so I want to make full use of that time, squeeze every drop! I’ll sleep on the plane.

You were also in Dubai quite recently as a keynote speaker on crypto-currency as a topic.

It’s not just bitcoin, it’s innovation, as a tool for transformation. How do we upgrade our healthcare systems? How do we upgrade the energy grids to have clean and abundant energy? How do we create financial inclusion in the world? How do we upgrade telecommunications and use artificial intelligence? So I’m generally known for the work that I do in this field, but I’m much broader than that.

There are cases of governmental resistance in accepting cryptocurrencies in certain countries, and in addition to that there was a bit of volatility recently with bitcoin, how do you feel that crypto will cope in the next few years?

Well, volatility and what happened recently, oh what an amazing data point that was. A trillion dollars of wealth wiped out in days. When that happens in any financial system, it breaks and the government has to come in and bail it out.

This system didn’t break, it didn’t skip a beat. Yeah our balance sheets temporarily took a dip, but the system works. It’s one of the greatest validating events that we’ve ever seen. A system that can function and doesn’t break, that didn’t wipe out or need a government bail out, it just works.

There’s the negative obvious, but when you look under the hood and you start to think more deeply about what it means, that’s an incredible validating event. Incredible shocks to the system without breaking. I am glad that this happened because it proved, yet again, the resiliency of this infrastructure.

What advice would you give to someone looking to invest in cryptocurrency?

I’ve never encouraged anyone to invest in this, I’ve only said invest in yourselves. Go buy a hundred dollars worth and learn what it’s all about so that you can make informed decisions for yourself.

I think that the place with the greatest potential is where we sit right now, Monaco. If Monaco made bitcoin a legal currency here, just think about what would happen in the casinos, think about the licensing opportunities that would be here. When bitcoin hits 100,000 dollars in value, a majority of the world’s billionaires will be bitcoiners. A majority of the billionaires on planet earth will have made their money doing this. Monaco probably wants to be a part of that.

The Principality of Monaco is tiny in size, could this make it a great testing bed to pioneer the functionality of cryptocurrency in society?

Well just think about its history, it fits into the storyline, and there’s no downside. Monaco doesn’t print its own money so the only real opposing argument comes from the central banks, and I think that it’s a bad argument, but it’s an argument nevertheless.

If Monaco printed its own money I could see why they might second guess it, but they don’t, so I don’t see any downsides. It’s in a fluent group, everyone can afford to lose a bit of money to learn. Monaco is small, making bitcoin easier to implement and making the country a great showcase to the world.

It sounds quite exciting.

That’s why I’m so excited to be here, because I see the potential, it’s got it.

Any personal goals for the future?

I ran for the President of the United States last year, so I’m very interested in politics and the system that governs over us, and how to make it better serve us here, there and everywhere. I’m a big advocate of life, liberty and the pursuit of happiness.

I’m a freedom advocate and operate from a place of love and compassion, while simultaneously understanding the importance of personal responsibility. This is where socialism and capitalism meet, and the truth is right there in the middle, it’s in the balance of both. I am a compassionate capitalist.

I understand that my actions have an effect, so I choose to do things that I think will have a positive impact on the world. I measure my success by the positive impact that I have.

You don’t hear the term compassionate capitalist too often but it’s refreshing. What made you decide to pursue the presidential election?

When I see something that I think is needed, I only do jobs that no one else will or can do, and when I see something that I think must be done, I take it as a moral obligation to act. It’s not a job that any sane person would want. Certainly a compassionate capitalist that gives to philanthropy and is out there trying to change the world, normally you wouldn’t see that as someone who wants to get into politics.

I think that the system is broken. The United States of America feels like the divided states of America, it’s divisive and polarising, and we have to have someone that can deliver a message of unity. How do we bring us back together?