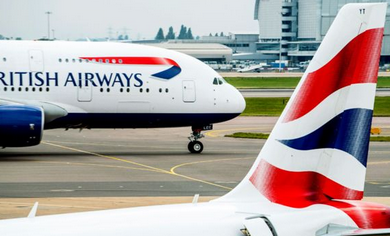 BA and EasyJet have both slashed their UK-Nice flights after UK Prime Minister Boris Johnson announced tough new restrictions on Brits leaving the country. In a move apparently aimed at resolute holidaymakers, Brits leaving the UK without what the government has called ‘a reasonable excuse,’ will face fines of 5,000 pounds.

Although this will have no direct impact on holders of European residency rights, who will be able to leave the UK without having to provide an excuse, reasonable or not, the airlines reacted by cutting back on flight frequency.

During normal times, travellers enjoy a choice of services to the UK, with several flights a day to London Airports on both BA and EasyJet.

BA will fly just three times a week from Nice to Heathrow in May, meaning that flights carrying Monaco and French residents will be as packed and potentially as much a hazard to health as they were before Christmas.

EasyJet has one flight to London scheduled for April, on the 30th, while in May the service to Gatwick will run twice a week until May 17, after which they pick up a little until June when the airline offers one flight a day, unless the rules change again, in which case the flight schedules are sure to follow suit.