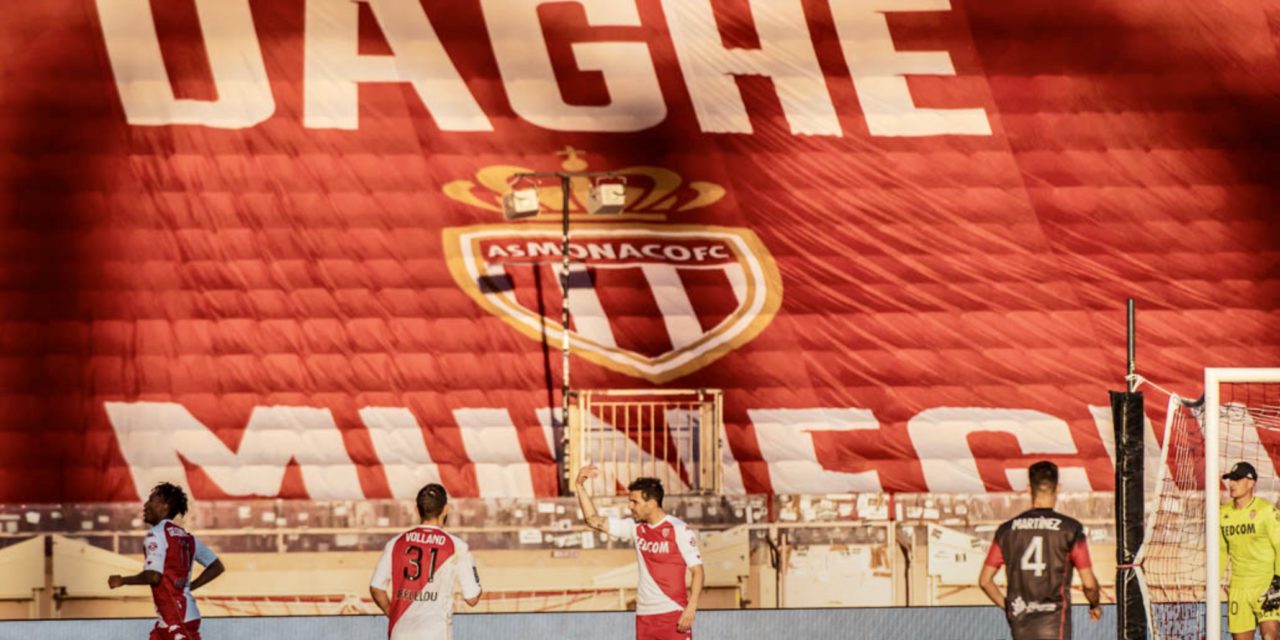 AS Monaco received Nîmes Olympique at the red and white’s stomping ground the Stade Louis II on Sunday, November 29. For this second consecutive home match, Head Coach Niko Kovac opted to play the same starting 11 that begun the memorable match against Paris Saint-Germain in the previous fixture. However, the formation was slightly different as the new kid on the block, Kevin Volland, took the sole striker position as the Monegasques were arranged in a 4-2-3-1 formation.

As soon as the match kicked-off, the red and whites were pressing up-field and were the first of the two sides to get their shots off, but to no avail just yet. Having failed to best Nîmes’ goalie Baptiste Reynet on a couple of shots, Monaco took a step back and begun to observe the flow of the match more cautiously. That was until “golden boy” Sofiane Diop managed to break away from his man-marker to meet and finish off a clean volley from Volland into the bottom corner of the Nîmes goal at the 19th minute to break the scoring open at 1-0 to the hosts.

Having got one in the bag, the red and whites took a small step back and maintained their midfield dominance before eventually returning to their goal-seeking onslaught after the half an hour mark. The forwards seemingly took turns to torment Reynet in goal as mere minutes separated the shot attempts, and it was Ruben Aguilar who had the last attempt of the first half at the 45th minute. It was a first half which was very much under the control of Monaco as the statistics show that the hosts made nine attempts on goal compared to the visitors’ zero.

Moments after the break, Nîmes made their first crack at the goal which was dealt with cleanly by Monaco’s new goalie, Vito Mannone. Monaco didn’t waste much time in bringing the ball back upfield after their opponents’ first offensive attempt. It would be Volland who lead the charge this time again as his teammates continued to make chances just behind him, but the German just couldn’t quite make it. At the 61st minute, Coach Kovac made the crucial decision to substitute Cesc Fabregas for the team captain, the wizard that is Wissam Ben Yedder.

The captain quickly commandeered control of the match as Monaco continued to apply pressure on their opponents. Perhaps it was this pressure which provoked Lucas Deaux’s mistimed tackle on Diop, which subsequently earned the Nîmes midfielder a red card at the 69th minute. With one man down in an already slanted match, Nîmes took the role of sitting duck. It would be Aguilar who was the first to capitalise on the newly emptied space on the pitch as he was able to cut and cross to Gelson Martins, who in turn used his head to find the back of the net at the 75th minute to make it 2-0.

The red and whites would still have been in the mood to celebrate when their captain managed to break free up the right side of the pitch. Ben Yedder then found an unmarked Volland with a clean cross into the far post, and the German finished the goal off calmly to make it 3-0 at the 76th minute. Being one of the last signing of this last transfer window, the ex-Bundesliga man seems to have settled into his new French side nicely as he scored his fifth goal in as many consecutive games.

Volland was substituted off at the 80th minute and presumably given a pat on the back before his replacement, Pietro Pellegri, made his own attempt on goal with a diving header at the 85th minute. Then, the final whistle blew and marked the end of Nîmes’ torment as Monaco celebrated their fourth consecutive victory in the top flight, their best run since that 2016/17 season. Kovac and Co’s clean streak temporarily propped them up to third place, just two behind the table leading Paris. Monaco’s next French fixture may pose more of a challenge though, as the red and whites will face of against Lille OSC away. Here’s to hoping that the Monegasques can maintain this newfound momentum.