Monaco stamps feature the old and the new 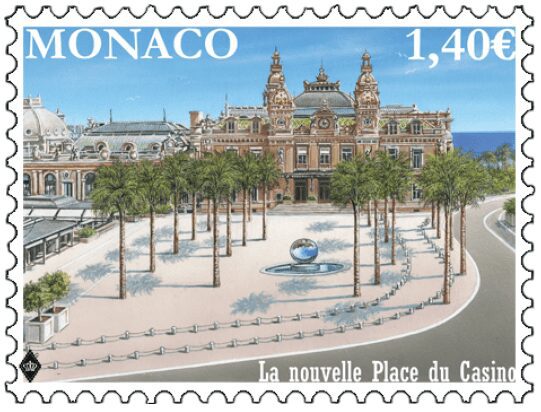 Monaco’s Office of Stamps and Coins will issue two new designs on September 14, both with a face value of 1.40 euros.

One will feature the newly-rebuilt Place du Casino. According to the office: “Following several months of construction work, Place du Casino is finally unveiling its new look. A modern, open space, which has been completely redesigned to ensure visitors’ enjoyment and comfort. The esplanade offers a clear view of the sumptuous Belle Époque buildings of the Casino de Monte-Carlo, Hotel de Paris and Café de Paris. The square has rediscovered the style it had when it was created in 1850. Anish Kapoor’s mirror, a vital embellishment of the old square, retains its place at the centre of the esplanade. The sculpture is surrounded by palm trees and a circular fountain designed to form a true little oasis.”

The second stamp features Prince Honoré III: “This year Monaco is celebrating the 300th anniversary of the birth of Prince Honoré III (1720–1795). With an educated and contemporary outlook, and receptive to Enlightenment thinking, Honoré III reigned for 60 years (1733–1793), the longest reign of all Monegasque sovereigns. He distinguished himself through a brilliant military career in the armies of Louis XV, and was promoted to general officer class in the French army, with the rank of maréchal de camp. An important French aristocrat (he inherited the title Duke of Valentinois from his father, Jacques de Goyon-Matignon), Prince Honoré III showed a great sense of humanity, which helped him to escape the guillotine during the Terror of the French Revolution, having been stripped of the Principality of Monaco, Menton and Roquebrune by the National Convention.”

Forty thousand of the stamps will be printed and will be on sale at the “Office des Timbres”, the “Musée des Timbres et des Monnaies”, the post offices and philatelic counters of the Principality, the Monaco stamp-dealers as well as the “Carré d’Encre” in Paris, France.