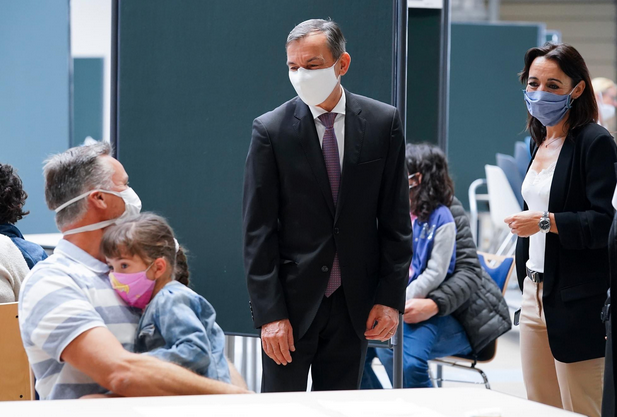 The Monaco Government reported on Tuesday, May 19, that the testing programme for Monaco residents got off to a calm and orderly start. A total of 972 Monegasques and residents were tested at the Grimaldi Forum and 560 at Espace Leo Ferre during the day, the Government said.

Residents have been invited by letter to attend either the Grimaldi Forum or the Espace Leo Ferre in Fontvielle for the free blood tests, which are voluntary and free of charge and carried out with an appointment. Once the programme is completed next week, Monaco will have conducted more tests per head of population than any other country.

Meanwhile, no new cases of the disease were reported in Monaco on Tuesday, following one new case on Monday. Eighty-seven of the individuals who contracted the virus have now fully-recovered out of a total of 97. Only one death has been recorded from within the Principality.

PHOTO: Minister of Health and Social Affairs Didier Gamerdinger (centre) was on hand to help make sure that everything went according to plan Monaco Government