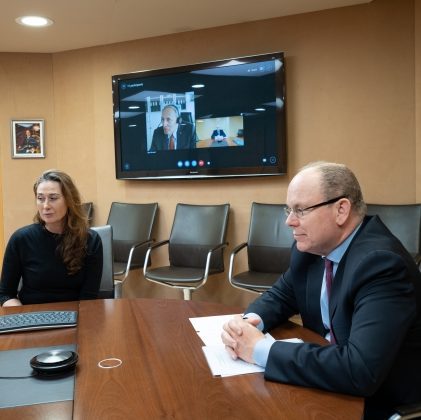 HSH Prince Albert held a videoconference from the Palace of Monaco with the five 2018-2020 post-doctoral students of the ITER (International Thermonuclear Experimental Reactor) post-doctoral fellowship programme on Monday, May 11.

Created in October 2007 under the aegis of the International Atomic Energy Agency (IAEA), the ITER project brings together the European Union, Japan, China, the United States, the Russian Federation, India and South Korea. Other countries and international organisations are also involved through technical cooperation agreements, memoranda of understanding and associations.

The ITER Agreement was signed in November 2006 and the Organisation was ratified by all Members in October 2007. ITER is a research and development project that will eventually lead to the construction of a nuclear fusion power plant in Cadarache, France. This project aims to demonstrate the technical feasibility of nuclear fusion as a new, renewable, reliable and environmentally friendly source of energy.

As early as 2008, the Principality of Monaco joined this project by signing a financial agreement (renewed in 2018) which provides for the funding of research work by post-doctoral students. The Principality is the only country to subsidise research through scholarships which it pays each year to finance the work of five post-doctoral students grouped together for a period of two years.

The Monaco/ITER Post-doctoral Fellowship Programme enables young researchers to participate in one of the major scientific and technical challenges of the 21st century and to work closely with leading experts in science and fusion technology in a unique international setting.

On the occasion of this videoconference, Proffesor Bernard Bigot, Director-General of the ITER Organisation, expressed his gratitude to HSH the Prince for the patronage provided by the Principality of Monaco and for its continued support for ITER. Dr Tim Luce, Head of ITER’s Science Department, then provided the Sovereign with an update on the progress of the ITER project.

Further to this, HSH Prince Albert II was able to talk with the five post-doctoral students about the progress of their research for ITER in their respective fields.