EXCLUSIVE FROM SHENZHEN: How China is beating coronavirus 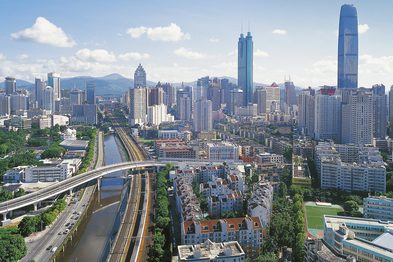 I’ve just returned from my accountant’s office, near where I live, here in Shenzhen, Southern China. I had my temperature checked first by the gateman at my apartment, then as I went into the office, and as I came out again. At the office door, on the way in, I also had to scan a QR code and provide phone number and passport number, for tracing in case I or the location become connected with an infection.

Shenzhen is in Guangdong, which is the province with the second highest number of cases, after Hubei. But whereas Hubei has had tens of thousands of cases, Guangdong has had just over 1,000, according to official figures which I have no reason to doubt.

At the start, it was deeply concerning, of course, especially with so many people travelling for the big holiday. I retreated from the city centre to a small hotel in the outskirts, where a lovely family fed me every day. The plan had been for three days, but I stayed for four weeks, during the shutdown of businesses and while most of the population stayed indoors, emerging only for essential purchases.

I carefully watched the official daily reports on numbers of new cases, but I was dismayed when my own government advised me to leave China – they made a bad and ill-informed decision, I think, for anywhere outside Hubei. In and around Wuhan, the healthcare system was overwhelmed by numbers and pace, but thanks to the mass quarantining, the same did not happen elsewhere.

Shenzhen, with a population of 13 million, has had a little over 400 cases. This modest number allowed healthcare quality to remain of the highest standard, such that there have been only three deaths. There have been two new cases here in the last two weeks, the most recent of which involved a new traveller from Bristol, UK, who became ill the day after arrival. It’s likely, of course, that the infection took place some time earlier, in the UK, on the plane, or perhaps in a transit lounge. The most significant continuing danger here, outside Hubei, is from such imported cases.

Most but not all companies are back at work, and one by one the restaurants are opening for more than take-away service, although my beloved coffee bars remain closed.

The policy here was necessary and effective. A virus is about individuals, but also about the connections in between. Breaking the connections through mass-quarantine drives the virus rapidly towards extinction, and that has been the purpose. But that, of course, is at a significant social and economic cost.

The author is a British businessman living and working in China PHOTO: Shenzhen, across the border from Hong Kong South China Morning Post