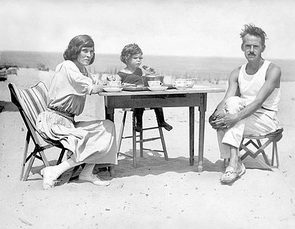 The Monaco-Ireland Arts Society will present scenes from the plays of Eugene O’Neill, the 1936 Nobel Prize Winner, the first American dramatist to be so honoured, at a performance on Friday March 20.

Undoubtedly one of the twentieth century’s most significant writers and quintessentially an autobiographical playwright, he recreates his own family’s experiences almost constantly throughout his plays. An event not to be missed, at the Auditorium du Collège Charles III, av. de l’Annonciade at 20.30.

A Moon for the Misbegotten: Set in a dilapidated Connecticut house in early September 1923, the play focuses on three characters: Josie, a domineering Irish woman with a quick tongue and a ruined reputation, her conniving father, tenant farmer Phil Hogan, and James Tyrone Jr, Hogan’s landlord and drinking companion, a cynical alcoholic haunted by the death of his mother.

The Iceman Cometh: Set in New York in 1912 in Harry Hope’s downmarket Greenwich Village saloon and rooming house. As the play opens, the regulars are expecting Hickey to arrive in time for Harry’s birthday party. The first act introduces the various characters as they bicker among themselves, showing how drunk and delusional they are, all the while awaiting Hickey.

Ile: The one act play  is set about Captain David Keeney, a man obsessed with finding oil, and his wife, who joins him on his ship for what ends up being a two-year voyage in the middle of the ocean that tests the limits of everyone on board. The crew is determined to track down whales to find “ile” (oil), but instead end up barged in ice for months, and the dejection is palpable from the beginning of the first scene.