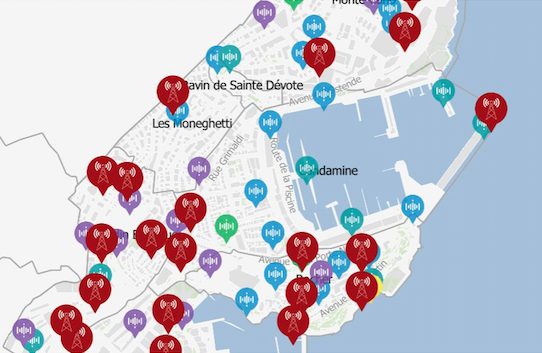 Following the launch of the 5G network in the Principality last July, and in the interests of transparency, the Monaco Government has published a dedicated website – www.cartoradio.mc – which maps the electromagnetic fields of all 32 radio transmission sites constituting the public communications networks in the Principality, encompassing both broadcasting and mobile telephony.

This interactive site uses the latest measurements of electromagnetic fields carried out by the Directorate for the Development of Digital Uses (DDUN), which are regularly updated, and which highlight compliance with the exposure limits of the Principality.

Cartoradio.mc is enriched by an electromagnetic cadastre on public roads. “3,800 measurements are made every 10 seconds by an exposure metre, which represents every 10 metres for a pedestrian who walks at a speed of 5 km/h. All of the Principality’s pedestrian and road traffic lanes are signposted. All the measurements are geolocated and time-stamped ”, said Christophe Pierre, Director of Development of Digital Uses (DDUN). He added: “We are not going to stop there.”

Before the end of the first half of 2020, the map will be completed by making measurements of probes on Monegasque soil monitoring the field continuously in real time.

“We are going to deploy 17 probes in order to cover the entire Monegasque territory. These new probes allow constant measurements of electromagnetic fields (mobile and global) 24 hours a day, recorded every six minutes. Thanks to these tools, these measures are made public almost directly,” Christophe Pierre said.

Powered by solar panels, the probes are also perfectly autonomous. They are installed on the roofs of the Principality’s schools (Charles III, Les Carmes, Saint Charles, etc.) and the Princess Grace Hospital Centre, as well as other locations.

With this tool, the Government is reaffirming its commitment to controlling the regulations in force in the Principality which are the most careful with regard to other international and national regulations, and also in its transparency of information, the Government said in a press release.

An explanatory leaflet was sent to all households in the Principality to answer the most frequent questions and will be available on the official government website (www.gouv.mc).