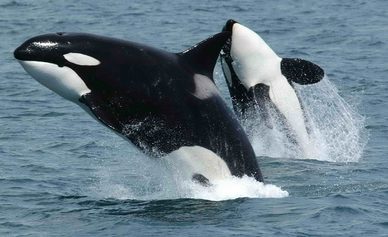 Three killer whales have been seen in the sea that separates the boot of Italy from Sicily, the first such sighting in the narrow straits. Marine biologists have said that they believe them to be part of a group of five that originally came from Iceland and was seen off Genoa in December.

Simone Vartuli, a 25-year-old fisherman, saw the fins of the killer whales emerge from the water on Friday and shot a video of the animals swimming alongside his boat.

“I moved forward until we almost touched them… Having them here in the Messina Strait was the best thing in my life,” he told Reuters TV on Monday, December 30.

“This is the first ever record of orcas migrating between Iceland and Italy in killer whale research history, and, we believe, at over 5,200 km, one of the longest migration routes ever recorded in the world to date,” the Orca Guardians association in Iceland said.

The pod originally included a calf believed to be about a year old, which died off Genoa of unknown causes. A coastguard video showed the mother trying to carry her dead calf before abandoning the body after several days.

Genoa is 800 km (500 miles) from the Straits of Messina. The Tethys Research Institute said it was “more than plausible” that the pod could have covered that distance in a week.

It is still unclear why the whales made such a long trip and it remains to be seen whether they stay in the Mediterranean or whether they move north again. Killer whales, also known as ‘evil geniuses’ for their hunting skills in packs, are a sub-species of dolphins.