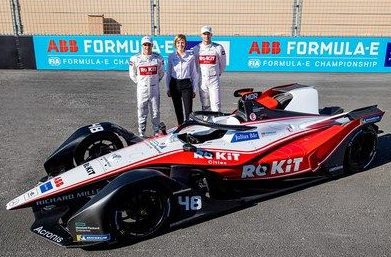 On the eve of the Formula E season-opener in Diriyah, Venturi Racing has announced a three-year sponsorship deal with global teleco innovators ROKiT.

Building upon its existing title partnership in Formula 1, ROKiT has entrusted Venturi Racing to expand its motorsport portfolio into the world’s premier all-electric racing series, the company said.

With a new name in ROKiT Venturi Racing, a striking new red and black livery and a new powertrain supplier in Mercedes-Benz, Season 6 signals the start of an exciting new era for the world’s only Monegasque racing team.

Alongside pioneering smartphone solutions, ROKiT has recently launched an international venture to aid the development of smart cities across the globe through ROKiT Cities – branding for which will feature on the race cars of both Felipe Massa and Edoardo Mortara, in addition to all team kit.

Having already introduced public Wi-Fi hotspots across 27 cities in India, ROKiT has a clear and ambitious vision for the future – aiming to create smart cities in 10 different countries over the next three years through the introduction of cost-effective connections.

Recording its maiden victory in Season 5, Venturi Racing is determined to continue its push towards the front of the Formula E grid whilst building upon a legacy of electric mobility innovation spanning almost two decades – including the imminent launch of the ground-breaking Antarctica polar exploration vehicle and an attempt at the two-wheeled electric land speed record.

Gildo Pastor, President, Venturi Automobiles, said: “The addition of ROKiT as our title partner for the next three seasons is a significant moment for the team. Our two brands share both a passion for innovation and a clear vision for the future of our technologies. This weekend we begin a new chapter together on track at the Diriyah E-Prix and I know the whole Venturi family shares my excitement for the start of what I am confident will be a very successful collaboration.”

Jonathan Kendrick, Chairman of ROK Brands and Co-Founder of ROKiT, said: “After meeting with the Venturi Racing team, there was no doubt in my mind that they are the ideal partner for ROKiT in Formula E. The ROKiT brand has fast become synonymous with doing things differently – we trailblaze. Formula E is breaking new ground and we’re excited to see where the championship can go. The city centre locations and rapidly growing fanbase make it a perfect platform from which to communicate ROKiT Cities.”