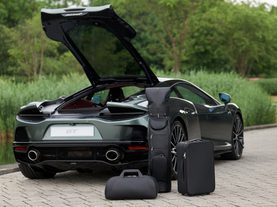 McLaren has announced a range of bespoke luggage for its new McLaren GT cars.

The company’s Track25 business plan will see it invest £1.2 billion in research and development to deliver 18 new cars or derivatives by the end of 2025.

In 2018, the company launched the 600LT and the first two cars of Track25, the McLaren Speedtail, the next Ultimate Series, and McLaren’s first ever Hyper-GT, and 720S Spider. It also opened a new £50m McLaren Composites Technology Centre in the Sheffield region in the North of England that will see it produce the next generation of lightweight carbon fibre ‘tubs’ that are at the heart of all McLaren cars.

2019 saw McLaren launch the 600LT Spider confirmed as the third car of Track25, with a new GT car announced and the previously-confirmed track-only Senna GTR unveiled.