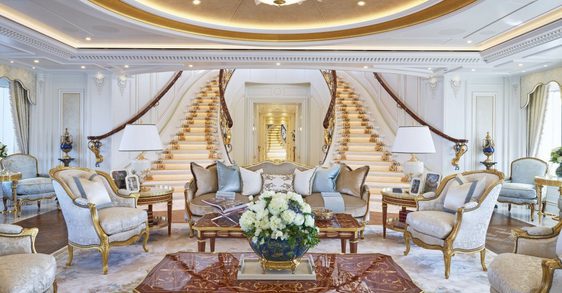 The motor yacht TIS is due to be at the Monaco Yacht Show in September and at 111 metres will be the largest super yacht to attend the event. TIS has a gross tonnage of 4,558, also making her the largest yacht in volume.

The website yachtcharterfleet.com reports that the MYS will be the yacht’s debut appearance. She has been available for charter since July.

Along with a 12-metre pool on the upper after deck, a beach club and spa, TIS accommodates up to 18 guests in nine suites. A sun deck doubles as a helipad and the owner’s quarters boast a private hair and beauty salon. Below decks there is space for two 13-mete tenders, two ten-metre tenders, and a submarine.

PHOTO: A great deal of gilt on display