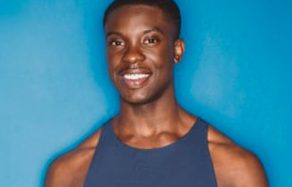 Stanley Glover, a dancer with BalletX, is the recipient of a 2019 Princess Grace Award in Dance. The Princess Grace Foundation-USA enlisted one of its most illustrious Award winners, Leslie Odom Jr., to announce the winners on August 13, 2019. The Awards will be presented at the Foundation’s annual Gala and continue the legacy of Princess Grace, who helped emerging artists pursue their artistic goals during Her lifetime. Since 1982, the Foundation has awarded nearly 800 artists with grants totalling over $1 million annually in theatre, dance and film.

“We are incredibly proud that company dancer Stanley Glover has received the prestigious Princess Grace Award, and thrilled he is among such a talented, creative group of artists. Stanley is a joy to be in the studio with, and his hard work and artistry are exceptional. This could not have gone to a more deserving person, and we thank the Foundation for recognising him with this honour and award,” said Christine Cox, Artistic and Executive Director of BalletX.

This year’s Gala will be held at the Plaza Hotel in New York City on November 25 in the presence of His Serene Highness Prince Albert.
Stanley Glover was born and raised on the south side of Chicago, Illinois. He began his dance training at Premiere One Dance Academy under the direction of Adrienne Brazile. He was a top-20 contestant on the 11th season of FOX’s hit television show, ‘So You Think You Can Dance.