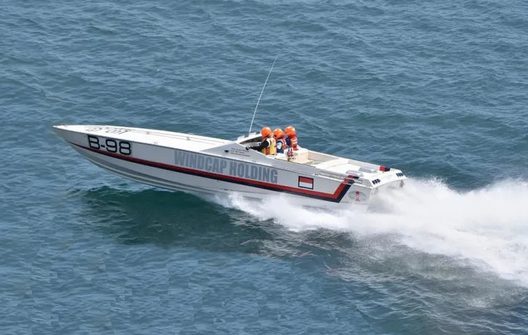 He expressed his team’s appreciation for support from two people in particular in the Principality: “I want to really thank two persons from Monaco, first of all Antonio Spiezia our team principal, without whom this programme wouldn’t have been possible, and secondly but certainly not least, Gianfranco Rossi, the president of the Monaco Powerboating Federation and also a world offshore champion on many occasions. Rossi is also the only racer who have won the Cowes Classic race four times — in 1981,1982, 1983 and 1984. He gave us great support, both technical and logistical.”

“The Principality of Monaco has a long history with powerboating, and has allowed racers from all over the world to develop in this beautiful and glamorous location. If my memory is good, Prince Albert won the Monaco-St Tropez offshore race in 1982 — accompanied again by Gianfranco Rossi.”

“We will use green energy to power Wild Eleven during these record attempts. We plan to modify the engines to use bio-ethanol, conduct tests to check its efficiency, and hopefully go on to use bio-ethanol in future races. Everybody needs to do something to mitigate climate change, and we hope that offshore powerboating on this side of the Atlantic will move towards replacing petrol, a fossil fuel, with bio-ethanol, a form of renewable energy.”