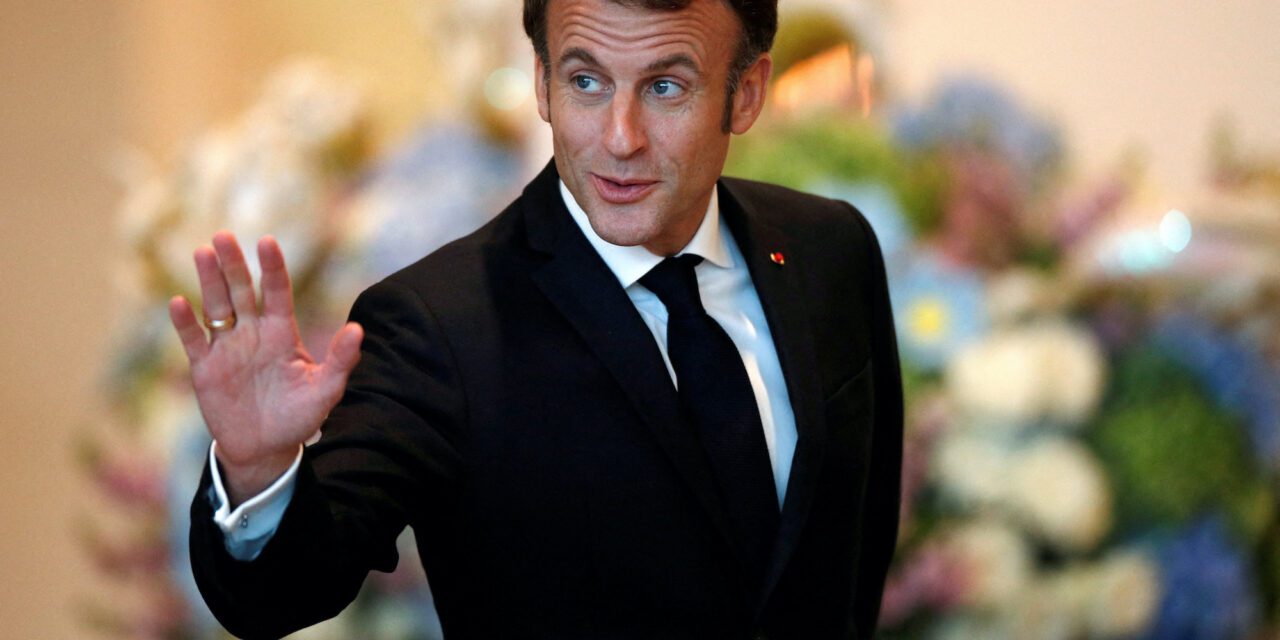 PARIS (Reuters) – French President Emmanuel Macron hosted a dinner on Monday evening with a number of European chief executives to convince them not to move production to the United States, where lower energy prices and the Inflation Reduction Act is proving a lure.

European leaders have been alarmed by massive anti-inflation measures passed by Joe Biden’s administration, which make tax breaks conditional on U.S-manufactured content and which EU industries say make investment in Europe less competitive.
“We’re having difficulties with companies which are starting to consider offshoring their production or making future investment outside Europe,” a French official said, listing high energy costs and the U.S. legislation as reasons.

At the Elysee palace, Macron sought to convince executives from companies including chemical groups Solvay and Air Liquide, carmakers Volvo and BMW, pharmaceutical giant AstraZeneca and telecom groups Ericsson and Orange to stay in Europe and choose France for their future investments.

Macron, who has called on the European Union to launch its own ‘European Buy Act’ to subsidise European production, has encountered resistance from the more anti-protectionist members of the bloc.

It was unclear what Macron told the executives to convince them not to move to the U.S. But France has unveiled a number of measures over the weekend to cushion the impact of high energy bills for French companies.

European companies have been increasingly strident about the impact of soaring energy prices since Russia’s invasion of Ukraine, which has pushed up gas and electricity prices.

Eric Trappier, CEO of Dassault Aviation, who heads the French federation of metals industries, warned in the Les Echos newspaper over the weekend that Europe should protect its own industry more aggressively or see it move to other shores.

Meanwhile, France will spend 8.4 billion euros ($8.67 billion) to help companies pay their energy bills, in a bid to cushion the impact of rising electricity and gas prices and help them compete with German businesses, its finance minister said on Saturday.

France will cut a special tax on electricity to the minimum allowed under EU rules and allow companies to tap a special mechanism to receive cheap nuclear-derived power. Small businesses will also benefit from the energy price caps already in place for households.

“(French) companies will be protected as well as German companies are,” Finance Minister Bruno Le Maire told France Inter radio.
“We will also make sure that EU competition rules apply to all companies, whether they are Italian, Spanish, French or German,” he said.

Earlier this year, Germany set out 200 billion euros to protect companies and households from high energy prices, drawing criticism from other EU countries fearing a distortion of the EU level playing field.

The 8.4 billion euros package France unveiled on Saturday is the cost for 2022 and 2023 together, the finance ministry said in a statement. France has already earmarked 45 billion euros to help households.