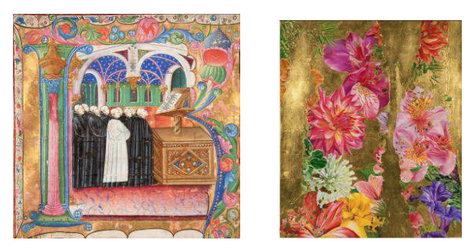 A journey from the 13th century to the present.

Painters from the 13th century to the contemporary period will be exhibited, including a Tuscan Byzantine painter, a collaborator of Segna di Buonaventura (a fresco), Pietro Lorenzetti and workshop, Niccolò di Pietro, Andrea di Bonaiuto, Jacobello del Fiore, and Bartolomeo Rigossi da Gallarate, to name only a few.

Gold has been used for millennia as a sign of wealth and beauty and to enhance sacred paintings, bringing them to their highest level through the application of gold leaf, punchmarks and detailed decoration. Such paintings were treasured objects, used to honour the people who commissioned them as well as the place in which they stood.

Being rare and precious, gold emphasised the power of the owners, the Church as an institution and entire communities.

Painters who specialised in working with gold were highly respected, and many of them became celebrated during their lifetime. Gold ground pictures were presented to local parishes, and the quantity of images often stood in direct proportion to the quality of relations between individual patrons and the Church.

The paintings have been combined with works by the contemporary artist Carlos Rolón, The artist has used gold to explore history that directly deals with questions of inclusion, aspiration, cultural identity, cultivated settings, and their relationship to post-colonial spaces, Maison d’Art says.

The idea of gold juxtaposed with stunning tropical flowers found in the New World of the Americas is in homage to their beauty while emphasising how colonisers urgently sought out gold to enrich themselves and the Spanish Crown.

The Americas were left with despoiled land while most of the gold went to Spain for the creation of gold bullion.

These new works reimagine the beautiful flora and fauna that protected these precious minerals, creating a sense of urgency and beauty from a place of destruction that pays homage to his native heritage of Puerto Rico.

BELOW: Work by Carlos Rolón