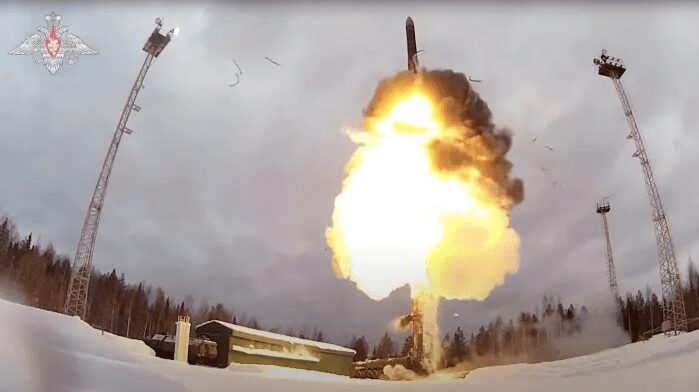 By Phil Stewart and Pavel Polityuk

RAMSTEIN AIR BASE, Germany/KYIV (Reuters) -The United States and its allies promised to send more heavy weaponry to Ukraine during talks at a German air base on Tuesday, brushing off a threat from Moscow that their support for Kyiv could lead to nuclear war.

But in a move that sharply raises the economic stakes for the West, Russia said it would turn off gas supplies to Poland on Wednesday morning after weeks of threats that it would cut off supply to countries who refuse to pay for gas in roubles.

Poland, a key NATO ally of the United States and among the European countries seeking the toughest possible sanctions against Russia, said it had sufficient gas reserves.

Russia’s defence ministry said its forces had “liberated” the entire Kherson region in southern Ukraine and parts of the Zaporizhzhia, Mykolaiv and Kharkiv regions, Interfax news agency reported. If confirmed, that would represent a significant Russian advance across eastern and southern Ukraine.

One of President Vladimir Putin’s closest allies, Nikolai Patrushev, said Ukraine was spiralling towards a collapse into “several states” due to what he cast as a U.S. attempt to use Kyiv to undermine Russia. His comments seemed to be an effort to blame Washington for any break-up of Ukraine that emerges from the war, now in its third month.

U.S. Defense Secretary Lloyd Austin, welcoming officials from more than 40 countries to Ramstein Air Base in Germany, headquarters of U.S. air power in Europe, said: “Nations from around the world stand united in our resolve to support Ukraine in its fight against Russia’s imperial aggression.

“Ukraine clearly believes that it can win, and so does everyone here,” he said.

The United States has ruled out sending its own or NATO forces to Ukraine but Washington and its European allies have supplied Kyiv with arms including howitzer heavy artillery, drones and anti-aircraft Stinger and anti-tank Javelin missiles.

In a notable shift, Germany, which had come under pressure after refusing Ukrainian pleas for heavy weapons, announced it would send Gepard light tanks with anti-aircraft guns. Washington welcomed Berlin’s move.

U.S. officials, speaking on condition of anonymity, believe Russia will rely heavily on artillery strikes to pound Ukrainian positions while moving in ground forces from several directions to try to envelop and wipe out much of Ukraine’s military.

But Washington also estimates that many Russian units are depleted, with some operating with personnel losses as high as 30 percent – a level considered by the U.S. military to be too high to keep fighting indefinitely.

In a marked escalation of Russian rhetoric, Foreign Minister Sergei Lavrov was asked on state TV late on Monday about the prospect of World War Three and whether the current situation could be compared to the 1962 Cuban missile crisis that nearly caused nuclear war.

“The danger is serious, real,” Lavrov said, according to the ministry’s transcript of the interview. “NATO, in essence, is engaged in a war with Russia through a proxy and is arming that proxy. War means war.”

“It’s obviously unhelpful,” Kirby said. “A nuclear war cannot be won and it shouldn’t be fought. There’s no reason for the current conflict in Ukraine to get to that level at all.”

Mark Milley, chairman of the U.S. Joint Chiefs of Staff, told reporters while flying to Tuesday’s meeting in Germany that the next few weeks in Ukraine would be “very, very critical”.

“They need continued support in order to be successful on the battlefield,” he said.

In a possible sign of the conflict spreading, Ukraine accused Russia of trying to drag neighbouring Moldova’s breakaway region of Transdniestria into its war on Kyiv after authorities in the Moscow-backed territory said they had been targeted by a series of attacks.

United Nations Secretary-General Antonio Guterres, visiting Moscow on Tuesday, said he was ready to fully mobilise the organisation’s resources to save lives and evacuate people from the besieged Ukrainian city of Mariupol.

Guterres, who is due to visit Kyiv on Thursday, proposed a “Humanitarian Contact Group” of Russia, Ukraine and U.N. officials to seek opportunities “for the opening of safe corridors, with local cessations of hostilities, and to guarantee that they are actually effective”.

The United Nations said Putin had agreed “in principle” during talks with Guterres to U.N. and Red Cross involvement in evacuating civilians from the Azovstal steel plant in Mariupol, scene of the worst fighting of the war.

In an interview with the government newspaper Rossiyskaya Gazeta, Putin ally Patrushev accused the United States of “trying to divide essentially a single people”, echoing Putin’s contention that Ukraine is really a part of Russia.

“The result of the policy of the West and the regime in Kyiv can only be the disintegration of Ukraine into several states,” said Patrushev, who is secretary of Russia’s Security Council.

Authorities in Transdniestria, the unrecognised sliver of land bordering southwestern Ukraine that has been occupied by Russian troops since the 1990s, said explosions had damaged two radio masts that broadcast in Russian and that one of its military units had been attacked.

Russia’s invasion of Ukraine, launched on February 24, has left thousands dead or injured, reduced towns and cities to rubble, and forced more than five million people to flee abroad.

Moscow calls its actions a “special operation” to disarm Ukraine and protect it from fascists. Ukraine and the West call this a false pretext for an unprovoked war to seize territory.