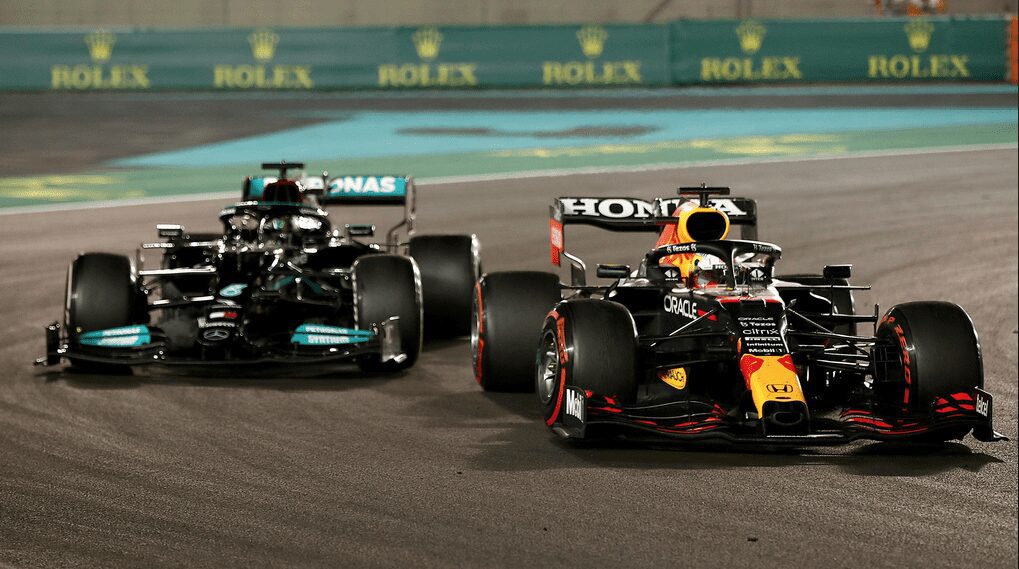 At the end of a thoroughly gripping 2021 Formula 1 season, we arrived at our final destination, Abu Dhabi.

After a tantilisingly close World Drivers Championship battle throughout the season, title rivals Lewis Hamilton and Max Verstappen lined up to the start line level on points, with 369.5 points each.

Verstappen led the pack away as the lights went out on track for the last time this year. However, Hamilton took the lead by the third lap, and proceeded to run away with it.

The gap between the two title contenders only grew, as Hamilton pulled away and Verstappen’s tyres began to suffer.

By the 14th lap of 58 at the Yas Marina Circuit, Verstappen was forced to pit, and came back out in fifth place just behind Lando Norris.

A lap later, and with his rival firmly in the rear view mirror, Hamilton pitted and re-emerged in second place behind Red Bull’s Sergio Perez.

By the 19th lap Verstappen had caught up to Hamilton, who had the task of passing Perez before Verstappen got too close.

“Hold up Lewis!” Exclaimed the Red Bull pit wall to Perez, who was doing a fine job at just that.

However, holding up Hamilton has historically been a difficult task, and the Brit managed to pass Perez halfway through the 21st lap. With that, Perez let Verstappen past and proceeded to pit.

The attention turned away from the race leaders in unfortunate circumstances on the 27th lap, as Kimi Raikkonen’s car suffered a brake failure.

After 349 race starts, Raikkonen retired from Formula 1 racing with a DNF. That is not how anyone wanted to see the ‘Iceman’s’ illustrious career to conclude.

Then, on the 28th lap, George Russell was also forced to retire from the race. This was made all the more unfortunate as this would be his last race with the Williams F1 team.

By the 35th lap, Hamilton was beginning to look more comfortable in the lead, but then another driver retired.

This time it would be Antonio Giovinazzi who would have to retire early, also in his final race in Formula 1.

A ‘Virtual Safety Car’ was deployed as a result, and Verstappen took the opportunity to pit for fresh tyres. This VSC period ended on the 38th lap, when 16.9 seconds separated Hamilton and his young title challenger.

By the 51st lap the gap was reduced to 11 seconds, and Hamilton’s tyres were 37 laps old. It would have to take more than experience and the best car on the grid to protect the lead with increasingly more worn down tyres.

It was very much looking like Hamilton could hold on until the very end, but then Nicolas Latifi crashed.

As a safety car was subsequently deployed, Hamilton stayed out on the track, while Verstappen pitted again for an even fresher set of tyres.

With that pit stop, five cars now separated the reigning champion from Verstappen, but a questionable call from race control ordered those cars to overtake the safety car, leaving Hamilton and Verstappen side by side with just one lap remaining.

Very much having the upper hand in the final lap, Verstappen overtook Hamilton going into Turn 5, and crossed the line in first place. Hamilton cruelly finished his race in second place, as Carlos Sainz completed the podium for Ferrari in third.

This would not just be any first-place finish, as Verstappen claimed his first World Drivers Championship, and prevented Hamilton from making history with a record eight WDCs to his name.

Neutral F1 fans could very well be delighted with this race, which caps off the most exciting F1 season in recent memory.