Monte-Carlo Diary – In the wrong job

I have no idea why I suffer from the compulsion to write. But at least it’s one step away from talking all the time. I believe I was 21 when I realised that no-one was listening to me. It was a very sudden moment of truth, and I halted in mid-sentence.

In those days there were no computers smaller than a barn, so I utilised pens and paper. Or a typerwriter. There was a machine called a Gestetner with a barrel you could turn with your left hand and this would revolve and you could feed in sheets of A4 paper, but I think it was called folio or foolscap in those pre-metric times, and the stencil I had cut on the big black upright typewriter would spew out many copies of whatever diatribe I’d put together about the evils of capitalism.

Then I would go to the Students’ Union and buy a very disgusting lager and lime for the present-day equivalent of five euro cents.

I had stopped talking but I was still a low-level menace to society.

Fast forward 55 years and imagine how I feel now. I have absolutely no idea what’s happening in the world. The knowledge I once had bears no relevance, and neither do I.

On Wednesday evening I went to a press event in Monaco. There were no journalists, of course, but lots of what they call ‘influencers.’ I’ve had this explained to me, so apparently they don’t write anything at all. But they take lots of photographs, of themselves. They then, somehow, copy these pictures from their telephones that serve as cameras onto something they call an instant gram. Then, so I am told, people can ‘visit’ them on this instant gram. Apparently, the aim is to get as many people as possible to ‘like’ their photos.

And the prosecco was in very short supply. At a press event!!! I was told that only those who had come on time deserved an alcoholic beverage. I was lost for words, which was just as well. And then a very kind young person, no more than 45 or so, came over and offered me a glass of water. Later I found out she was the mother of the star influencer, and so young-looking!

I left. I have no idea what the press event was about, but on the way out another kind and very young person said she was very sorry that Carlo couldn’t make it.

I staggered up the street stroking my beard and wondered if this was a special code.

Oceanographic gets waste message across in great style 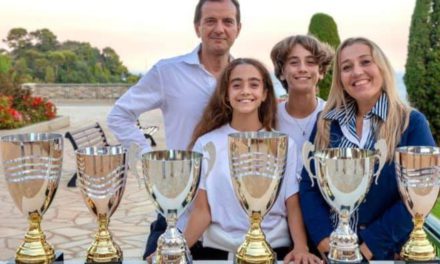 Team Ambrosio MC goes above and beyond