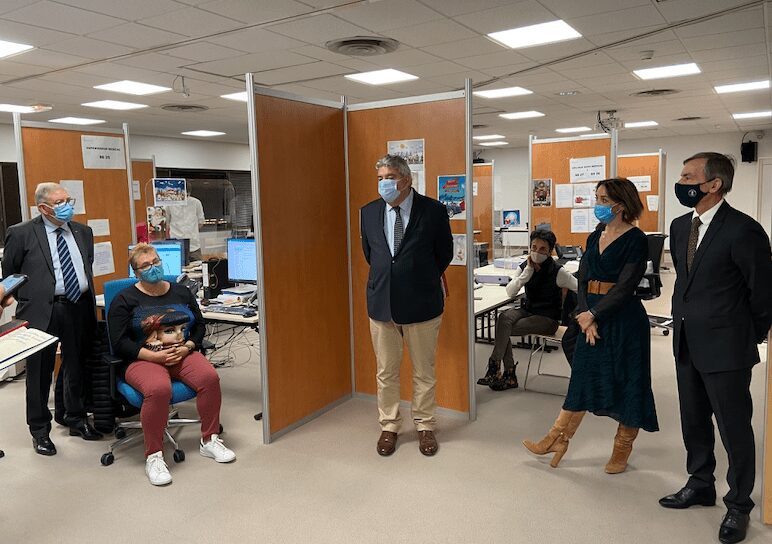 The Home Monitoring Centre, housed in the Auditorium Rainier III, has been efficiently coordinating the Principality’s response to coronavirus since its establishment in May. Its two large rooms, equipped with computers and telephones, comprise Monaco’s nerve centre in the battle against the virus.

Many of the people who work in the centre are volunteers, including retired doctors and nurses who give their time willingly. Monaco Red Cross workers are also a vital cog in the machinery.

On Monday, November 30, the centre received a visit from Minister of State Pierre Dartout and Minister of Health and Social Affairs Didier Gamerdinger, who are no strangers to the centre. They were accompanied on this occasion by Monaco’s journalists and press photographers.

Mme Ludmilla Raconnat Le Goff updated the visitors on the progress being made, underling the fact that the operation has been adjusted to changing needs over the last few months.

Pierre Dartout thanked everyone at the centre and pointed out that the health situation at the start of November was very worrying. The centre has played a central role in ensuring that those who develop symptoms receive all the help they need without delay. Help and advice is always available.

Mr Dartout said that the centre and the way that it works could not easily be transposed to a larger area than Monaco, and the size of the Principality has helped its success.

“The battle is not won. We must remain very vigilant,” the minister said.