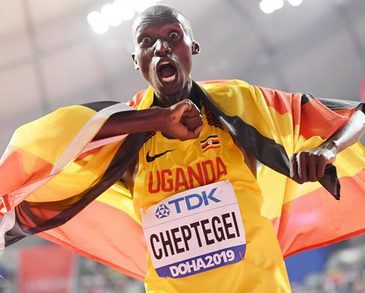 The 10,000m World Champion, Joshua Cheptegei, has confirmed he is coming to Monaco for the 5km Herculis race on Sunday February 16, starting at 10:15.

In a continuation of the 2019 edition, the Monegasque Athletics Federation will offer
events suitable for all levels and all ages as well as a charity walk.

Before the 5km Herculis, Port Hercule will host the City Trail of approximately 10km, an opportunity to explore the streets of the Principality from a new angle, which won over many trail enthusiasts last year.

For the curious wishing to test themselves in an urban setting and discover in particular the Casino gardens, the Rock or the Louis II Stadium, the departure will be at 8:30 on Sunday February 16.

On Saturday February 15, runners can collect their bibs at the Running Expo from 10:00 to 17:00. 1000m races will enliven the afternoon of Saturday. These free races are open to everyone from the age of eight.

Meanwhile, the Pink Ribbon Walk, a charity walk of around 5km aimed at raising awareness about breast cancer, will take participants across the Principality dressed in pink, starting at 10:00 on Sunday February 16.