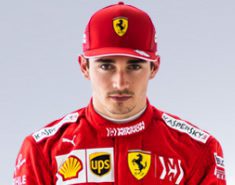 Monaco’s Charles Leclerc has been voted “Nice Riviera Sportsman of 2019” by readers of Nice Matin, the regional French-language newspaper. The 22 year-old Monegasque had been runner up in 2017 and 2018.

“I sincerely thank all the readers who elected me the Riviera sportsman of the year 2019. 2020 is fast approaching and I am already in full preparation for a season that promises to be intense and during which I still hope to honour the colours of Monaco,” he said.

Last week Leclerc was signed for a further five years by the Ferrari Formula 1 team, having won two grand prix races during the 2019 season. In second place in the poll was Fabio Quartararo. The 20 year-old Niçois has just completed his debut season in Moto GP.