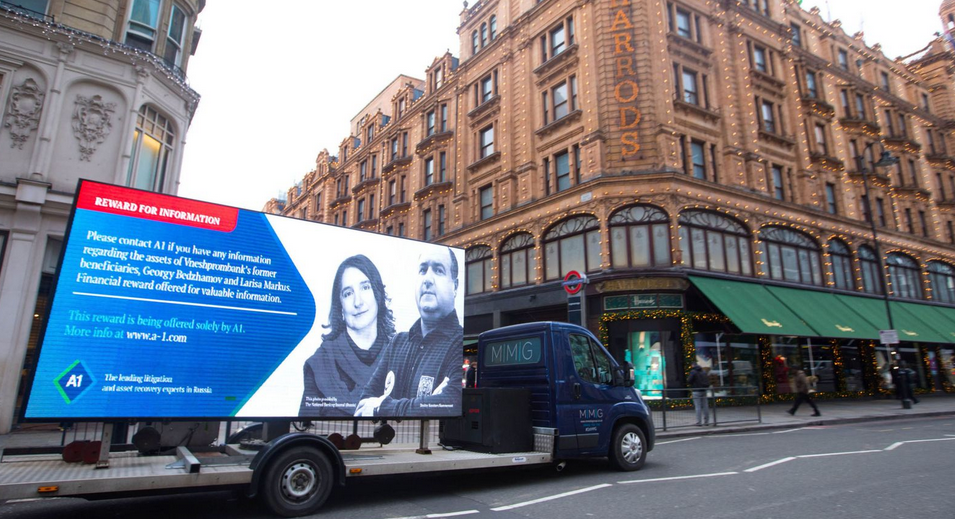 A recovery firm is driving a mobile billboard around London asking for information about the whereabouts of a Russian fugitive’s assets. Harrods, the department store popular with high-spending Russians, has been targeted.

Georgy Bedzhamov and his sister Larisa Markus are alleged to have defrauded Russian retail bank Vneshprombank out of Rbs210bn (£2.5 billion).

Ms Markus was sentenced to nine years in prison in 2017 after admitting to the theft of Rbs114bn (£1.4 billion), and is awaiting trial on new charges filed in January.

A1, which describes its staff as the “the leading litigation and asset recovery experts in Russia”, has offered a financial reward for information about the siblings’ assets.

Their mobile billboard was spotted outside Harrods in Knightsbridge on Thursday and features a photograph of Ms Markus on the left and Mr Bedzhamov on the right.

The message reads: “Reward for information.”

Andrei Elinson, Managing Partner of A1, told London’s Daily Telegraph: “After a successful campaign conducted in Moscow’s international airports earlier this year, A1 is expanding this approach to target regions abroad where alleged fraudsters and their accomplices reside. London is no longer a safe haven for individuals seeking to hide stolen assets.”

In April the High Court in London granted claimants the right to pursue Mr Bedzhanov’s wealth and issued a world wide freezing order on an estimated £1.34 billion of his assets, including properties in London, Tel Aviv and the South of France.

The ruling is said to have given claimants the ability to search a townhouse Mr Bedzhamov had used as an office.

He was also ordered not to leave England and Wales and not to spend more than £10,000 a week above the £35,000 he pays to rent a Mayfair penthouse, according to reports. Mr Bedzhamov is said to have denied the criminal charges against him in Russia.

He reportedly still lives in homes in both London and Monaco. He owns an empty £45 million townhouse in Belgravia, where the mobile ad vehicle was also seen on Thursday.

A1 is part of oligarch Mikhail Fridman’s Alfa Group.

The company said the size of any reward paid would be determined on a “case by case” basis, and could include a fixed one-off payment or an agreed percentage of the total value of assets recovered, the Telegraph reported.

Mr Bedzhamov recently challenged an order which capped his monthly spending at £80,000. He successfully managed to increase this to £161,000, claiming it was not enough to cover rent, medical expenses, school fees and security teams in London and Monaco.

More items banned in fight against plastics in Monaco