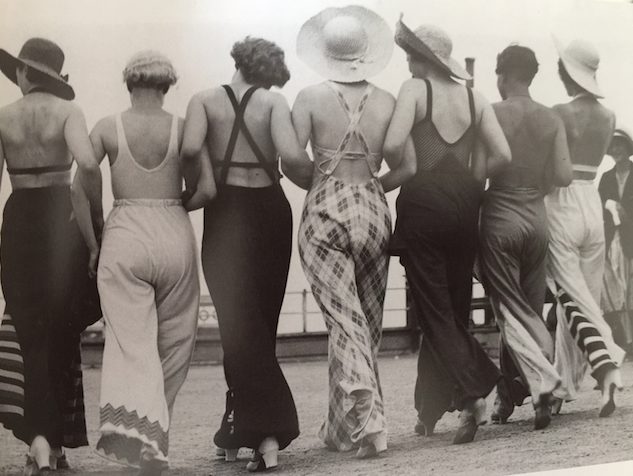 Shocking and riveting are the two words that best describe a new book by Anne de Courcy: Chanel’s Riviera: Life, Love and the Struggle for Survival on the Cote d’Azur, 1930-1944.

The social historian and biographer, whose other work includes The Husband Hunters and Debs at War, places Coco Chanel centre-stage as she describes how the gilded lifestyle of the expat Riviera, which seemed so isolated from unfolding events elsewhere on the continent, came to an inglorious end with the fall of France and the installation of the Vichy regime.

While the Riviera became home to many prominent writers and thinkers, including Aldous Huxley, who wrote Brave New World while living on the coast, and Georges Simenon of Maigret fame, many of the less well-known characters were equally fascinating and in their own ways reflected the hedonism of the age. One larger than life character was Lord Castlerosse, whose girth was so pronounced he took the nickname Lord Elephant and Castlerosse. His lordship took a fancy to Doris Delevingne, a dazzling blonde, de Courcy tells us, otherwise known as the Mistress of Mayfair. Her name has also been linked to Winston Churchill, whose penchant for the Riviera is well-known.

Churchill was a frequent guest at the Hotel de Paris, where he took a suite for months on end. One well-known anecdote repeated by de Courcy illustrates the growing unpredictability of the 1930s: Churchill lost a substantial amount at the Casino one evening after a protracted losing streak and told the management that he would come back the next day to settle his debt. However, this he was not able to do as he was summoned urgently to London on government business. Only after the war, seven years later, was Britain’s wartime leader able to return to Monte-Carlo to settle his bill. The cheque was never cashed.

Despite consular advice to leave, many of the thousands of British residents along the Riviera stayed in place. However, in June 1940 three thousand Brits gathered at the port in Cannes to board two coal tankers sent to collect them. Some of the anglais threw their car keys to the watching throng, while one expat drove his Rolls-Royce into the sea, de Courcy tells us.

To say that conditions aboard the merchant ships whose sole purpose was to carry coal from South Wales to mainland Europe were dire would fail entirely to do justice to the situation. On board the Ashcrest and Saltersgate, there was no food, water, or separate cabins. The two lavatories on each ship were reserved for women. Luckily, both vessels made it safely to England, with the Saltersgate, avoiding German submarines, taking 20 days from Marseille.

At first the Riviera was occupied by Italian forces, who soon established the fact that Jewish residents and refugees would not be victimised. Only with the fall of Mussolini and the arrival of German forces did the day to day life of Riviera residents take a major turn for the worse. Despite increasing signs that Germany could lose the war, the Gestapo went in relentless pursuit of Jews, raiding schools, hospitals and old peoples’ homes.

Allied raids heightened fears of death and destruction as the Americans and Brits targeted railway lines and ports. In early August, Allied troops landed just a few miles from Cannes and within days the German troops – by now made up of foreigners, youngsters and older men – left the town, heading east, a retreat mirrored all along the Riviera. They did not leave quietly, shooting suspected resistance fighters in a last show of horror.

After several more months of desperate food shortages, the Riviera soon bounced back. By 1946, many of the coast’s most famous figures had returned and in September of that year the first Cannes Film Festival was held.

De Courcy’s narrative is a non-stop torrent of detail and colour, into which this reviewer has simply dipped. Anyone familiar with the Cote d’Azur will find Chanel’s Riviera a ‘must-read’ this summer. Published by Weidenfeld & Nicolson, £20:00.

Illustration from the book: Young women in beach pyjamas, all the rage in 1934